BT Senior’s Adventures in the Capitol 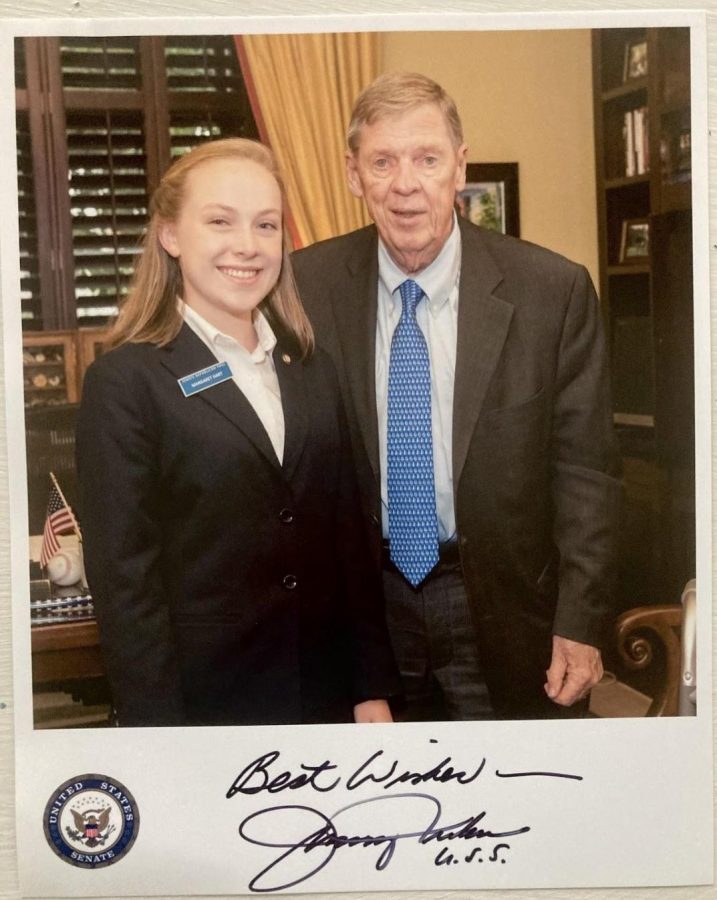 Picture taken of Margaret with her sponsor, former Georgia Senator Johnny Isakson, at the beginning of the Senate Page Program.

Most endorse the idea that one’s junior year is as academically challenging as it gets. The stress of the college search process and test prep, in conjunction with the already demanding aspects of school is ample enough for most students, but current senior Margaret Hart took on an even greater challenge. As BT students progressed through their first semester of the previous academic year, Margaret was hard at work in the nation’s capital serving as a Senate Page.

This unique process offers teens from all across the nation a vital role in the everyday workings of Congress and can be traced back to Senator Daniel Webster’s appointment of the first Senate Page in 1829. Senate page duties consist primarily of “being messengers for the delivery of correspondence and legislative material within the Congressional Complex”, as formally stated on the Senate Page Online Reference Page.

Margaret’s days remained consistent, so consistent that it was scheduled down to the very hour. The typically later start to the day, hours worth of school, and free time for extracurriculars students at BT often take for granted were no longer part of her life. A brief outline of her days followed this schedule:

6:00 am: Breakfast: (Margaret’s go-to consisted of an uncooked waffle and “coffee… lots of coffee!”)

9:30 am: End of School. The Pages begin the 3-block walk to the Capitol Building

6:30 pm: The Pages arrive back at their dorms

This schedule shows a tremendous difference from that of a typical Blessed Trinity school day. The eight hour days Margaret was accustomed to had reduced to around three, and subsequently so did her class load. She explained, “We only took four classes. We took Math, Science, History, and English. That’s all we had time for”. This unique dynamic between school and work placed a greater emphasis on the Senate Page’s job in Congress and allowed more time for the students to participate in their congressional duties.

Margaret’s personal life endured major changes as well, from roommates to an 11:00 p.m. enforced bedtime, though nothing was as notable as the confiscation of all technology and internet reaching products.

Margaret explained this shocking elimination of what some would consider a vital part of our generation’s social experience, saying, “We weren’t allowed to have phones, that was one really interesting thing. When we first got to DC and checked into the dorms to move in, they took our phones and they locked him up in a safe!”

The Pages’ communication with their families back home took an even more amusing turn with Margaret’s revelation that “The only phone we had was in the closet. There was a wall phone like one that you actually pick up from the wall and it had a really long cord and that’s how I called people. But [the government] could listen to all your conversations so I could only really call my mom!”

Despite her access to top-secret government information that neither the public nor the media had any knowledge of, she was far from knowledgeable on the headlines that topped Gen-Z culture during her time as a Page, saying “Honestly, it was kind of a crazy paradox between me feeling like I knew half the things that were going on before other people did because I was right there in the room where it was all taking place. But other things I had no knowledge of.”

Some pop culture moments ingrained in the memories of America’s youth such as the Area 51 raid and the rise of popular TikTok dancer Charli D’Amelio went completely unnoticed by Margaret and her peers. Margaret adds, “Another funny thing from when I came home was that I thought that all these songs were new. I would say, ‘oh my gosh you have got to hear this new song!’, and people would be like ‘Margaret, that came out five months ago’”. She clarified stating, “We didn’t hear any music unless you downloaded songs or something. I mean the only way you could listen to the radio is by tuning into a senate hearing channel on the TV and they would sometimes play music in the background.” She followed with a laugh.

Being surrounded by some of the most prominent figures in American democracy, and even the free world, Margaret recounts her experience saying, “It’s definitely hard being the youngest. I mean there are no other sixteen-year-olds working in the Senate. Most [Senators] are way older than you and have so many more degrees. They’re really important and you’re kind of just a fly on the wall. So it’s very hard to be assertive and work so hard that young, and especially as a female in Washington, it’s harder too.”

When asked about how this experience changed her perspective on politics and the United States Government as a whole, Margaret responded, “when I first moved to [DC], I was convinced I was going to do journalism, but I discovered that what I actually wanted to do was a little bit more of a behind-the-scenes thing. What I figured out is the people who make the biggest difference in Washington are the ones that talk the least. The actual Senators are the people that you see push the button, right? They’ll vote ‘yes’, or they’ll vote ‘no’. They go and talk to people. But everything that they say and everything that went into their decision was done by a whole army of people behind them.”

Living and working with 28 teens from all across the country, the exposure pages have to vast varieties of people comes unique with the Program. To put it in Margaret’s words, “It just opens up your worldview when you’re the only person from Georgia. Everyone comes from such different backgrounds. I mean all different sides of the political spectrum, all different religions, all different viewpoints and accents were represented. It can change your entire perspective on things and help you to figure out that sometimes by interacting with people that are so different from you it can either strengthen your views on something, or it can open you up to something that you never knew you would agree with.”