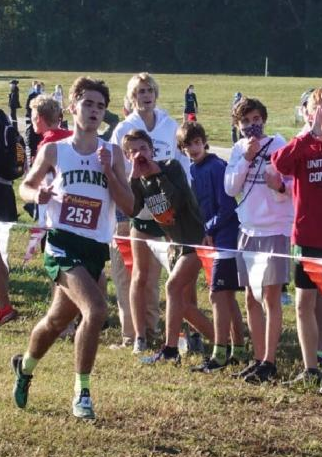 Lucas Barquin is a junior at Blessed Trinity. He is involved in Interact Club, Engineering, Spanish Club, Habitat for Humanity, and Student Government, but his favorite extracurricular activity is Cross Country.

Lucas went into further detail about Cross Country, explaining that he has practice every day for about 45 minutes after school. At practice, they either have a workout day – which can include mile repeats, tempo runs, or long runs – or light workouts. Lucas admitted that it is a huge commitment to make, but in his eyes, it pays off “in the long run”. He elaborated, “It builds unwavering determination and teaches you how to have a great work ethic and to strive for a goal.”

A huge part of Cross Country is getting to know and learning to trust your teammates. It is crucial that if you are having a bad run, you know that your teammates will pick you up and push you even harder so that next time you will do better.

Referring to Covid-19 and its effect on BT Cross Country, Lucas conceded that it has hindered their opportunity to bond as teammates and build trust because many of their practices have been cancelled. However, he believes that the Cross Country team has a great culture and that they have not let the virus destroy that. They also have to wear masks whenever they are not running, several of their meets have been called off, and some of his teammates have opted to do virtual school to avoid contracting Covid-19 and missing the state championship.

In order to prepare for a meet, there are several steps that Lucas says must be taken. He advises to always train with the mindset that the training will set you up for success in the meet. In addition, he says to make sure to always eat as healthy as possible, because if you eat unhealthily, it will most likely negatively affect the way that you run. Lucas also always makes sure that he knows what the course is going to look like, so that he is never surprised by a certain part of the course, such as a large hill. Finally, Lucas sets goals for himself to achieve during the race. For example, Lucas, along with his teammates, always have the goal of setting a new personal record.

Expressing his gratitude to be able to go to Blessed Trinity, Lucas told me some of his favorite parts of being a BT student. First, he loves the teachers. He praised them, saying, “They are all so nice, and they are committed to helping us students learn and preparing us for not only college but for the rest of our lives, too.” He also loves the Catholic community that BT has. He believes that the friendliness and genuine love that he feels like a member of the community is something that he could not get at any other school. Finally, Lucas loves the people at BT. He has found a good group of friends that support him in all of his endeavors and who accept him for the goofy guy that he is.