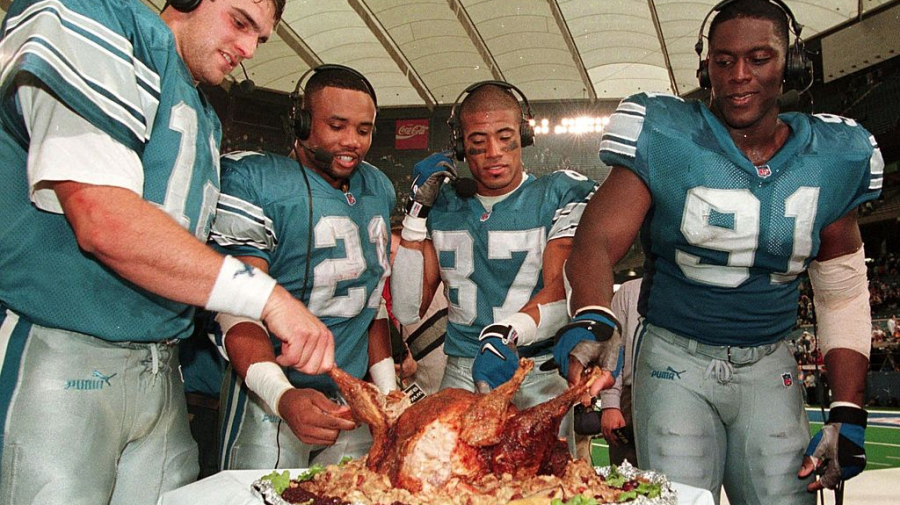 Thanksgiving, one of the oldest and most widely celebrated holidays in the United States, is a day packed with traditions. From the turkey pardoning at the White House to feasting with your family or watching the Macy’s Thanksgiving Day Parade, there are definitely a plethora of things to do on Thanksgiving. Some people indulge in large feasts with extended family while others prefer more intimate gatherings, but there is one tradition that almost everyone adheres to Thanksgiving football! Whether it be physically playing football with family or watching the three NFL games on TV, even non-football fans have a hard time avoiding the pigskin on Thanksgiving.

Walking through the halls of Blessed Trinity, I asked random students what some of their Thanksgiving traditions were. Some of the more common answers I received include the Macy’s Thanksgiving Day Parade and visiting family. I also received some other, more unique answers, such as: eating turducken instead of turkey or having a pie-eating contest. However, as expected, the most frequent answer I received by far was football!

One person who truly appreciated the tradition of football on Thanksgiving was John Madden. Starting in 1989, Madden, a former NFL coach and broadcaster, gave out “Turkey Leg Awards” to the most outstanding players on Thanksgiving. He awarded the first turkey leg to Reggie White, and the tradition stuck. The next year, Madden gave the turkey leg to Emmitt Smith of the Cowboys, but he said that he wished he could give a leg out to the entire Cowboys offensive line. This led an owner of a barbecue restaurant to invent a “6-legged turkey” so that Madden could award even more turkey legs. In 1997, during a Thanksgiving Day broadcast, John Madden introduced a new tradition to Thanksgiving football, the turducken. Madden eloquently explained, “This is a turducken right here, where we’ve got, you know what a turducken is, a turducken, this thing here is a de-boned duck, stuffed in a de-boned chicken, stuffed in a de-boned turkey, with stuffing. Now you’re talking! And that has eight legs.” Demonstrating with his hand, Madden elaborated, “You cut this right down the middle. And then you cut sideways, and you get a little turkey, and a little chicken, and a little duck. Now that there, that’s a turducken.” Consequently, turducken sales in America skyrocketed, and for the rest of his Thanksgiving Day broadcasts, Madden always had a turducken with him in the booth.

Although the Thanksgiving football tradition actually began in 1876, the first NFL game on Thanksgiving was in 1934, when the Detroit Lions battled the reigning champion Chicago Bears, and there has been a game on Thanksgiving almost every year since. Lions owner George A. Richards scheduled the game as a way to bring attention to the newly-formed organization, for they were losing many viewers to the popular Detroit Tigers. Although the Lions lost 19-16, they established a tradition that has lasted over 86 years. The only years where there were no NFL Thanksgiving games were 1941-1945, due to the US involvement in World War II. Following a 1978 agreement with commissioner Pete Rozelle, the Dallas Cowboys joined the Lions as the only teams to always have a Thanksgiving game on their schedules. For 26 years, only the Lions and Cowboys games were played, but in 2006 a third Thanksgiving Day game was added. NFL Thanksgiving games continue to get more and more popular each year. Last year, the Cowboys-Bills game set a viewership record, racking in over 32 million viewers. This tradition is only growing and is becoming more integrated into Thanksgiving than ever. Regardless if your favorite team is playing or not, NFL football is essential to a great Thanksgiving.