Once a Titan, Always a Titan 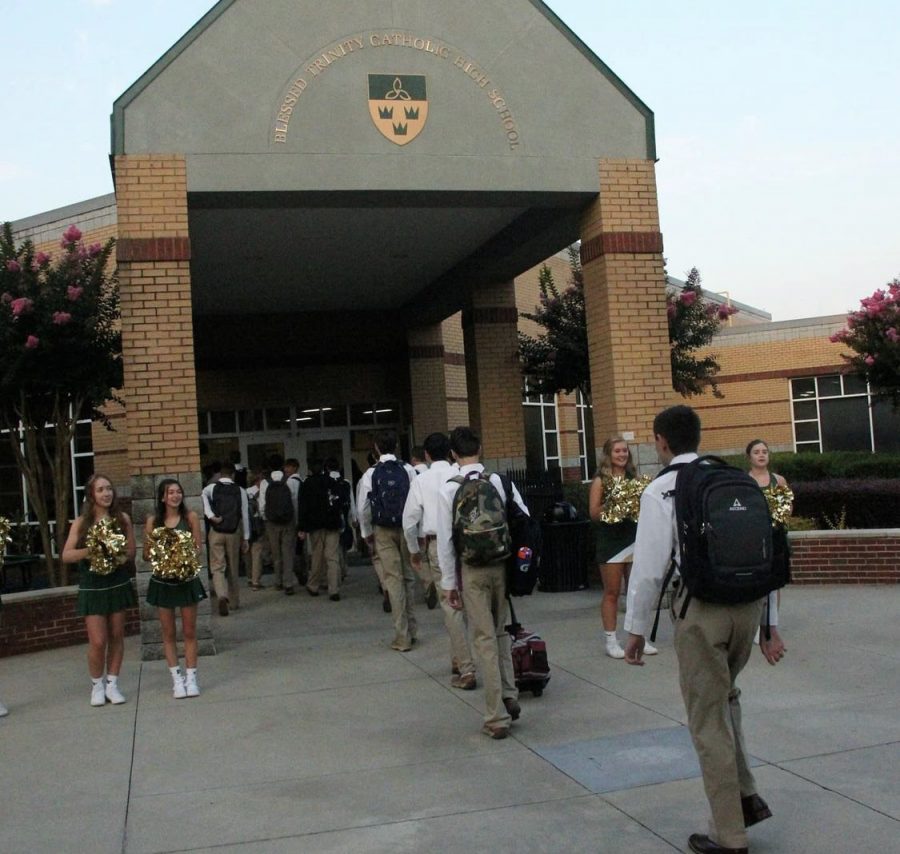 As a student walking through the halls of Blessed Trinity, it is hard to picture what it might be like ten or twenty years from now. It is also difficult to look back and wonder what it was like for students that roamed the same halls as you do right now. Regardless, this school leaves its mark on every BT Titan by the time they walk across the stage at graduation. We see how special BT really is when we realize that some faculty and teachers in our classrooms today used to be students here, sitting in the same spots we currently do.

“I love being able to teach at the high school that I went to.  It’s relatable to me because what you students are going through today, is almost exactly what I went through…It allows me to be more understanding in certain situations, but I also know when you’re throwing smoke,” comments Mr. Contratto, one of BT’s astounding math teachers. Contratto graduated from BT in 2007 and remembered that there was a lot of “trial and error to determine what would fit the school and the students best”. Contratto says that BT has had a lot of improvements since the early 2000s such as providing “more opportunities to engage in your faith now like the Kairos retreats” and creating new classes like engineering.

Mrs. New who, like Contratto, graduated in 2007 and is currently in the math department revealed that having a job at your past high school helps when transitioning into work since she already knew how most things worked. Also, being a past sports player and now a coach has “made things easier knowing how it works on both ends”. If New could go back to her high school days and take something with her, she said it would be the senior funfest and the new and improved learning commons where she could relax on the couch and study.

Moving to the registrar office, Mrs. Rick says that “BT was very similar to what it looks like today [and] all the best things about being a student have really stayed the same”. However, the technology at BT has upgraded since 2012 when Rick graduated. “A lot of us still had our own personal laptops that we would bring around sometimes but they were not something you see on every desk in every class like you see now,” says Rick. Something Rick wishes she had when she was a student was “more options for weight training classes” since the ones available were more “geared toward male student-athletes”. Thankfully, BT has grown into a sports oriented school for everyone and she observed that more girls are a part of weight-training. By being a former student, Rick has felt that it helped her relate to the current students at BT. “I feel like I can be really honest with prospective students about what to expect as a BT student because I actually was a student at one point,” comments Rick.

It truly makes a difference when teachers can relate to students since they have been in the exact same shoes as them. Contratto, New, Rick, and other teachers that went to BT were in part drawn back to BT because of the community it provides. “It truly is a family here at BT, which is not something you get at a lot of high schools,” states New. While it is unique that former students become teachers, it is exceptionally admirable that some faculty and teachers have been a part of the school since the beginning and have flourished alongside it. A special shoutout goes to all the teachers, faculty, and staff that have made BT what it is today and inspire people to want to come back. Remember: Once a Titan, always a Titan.