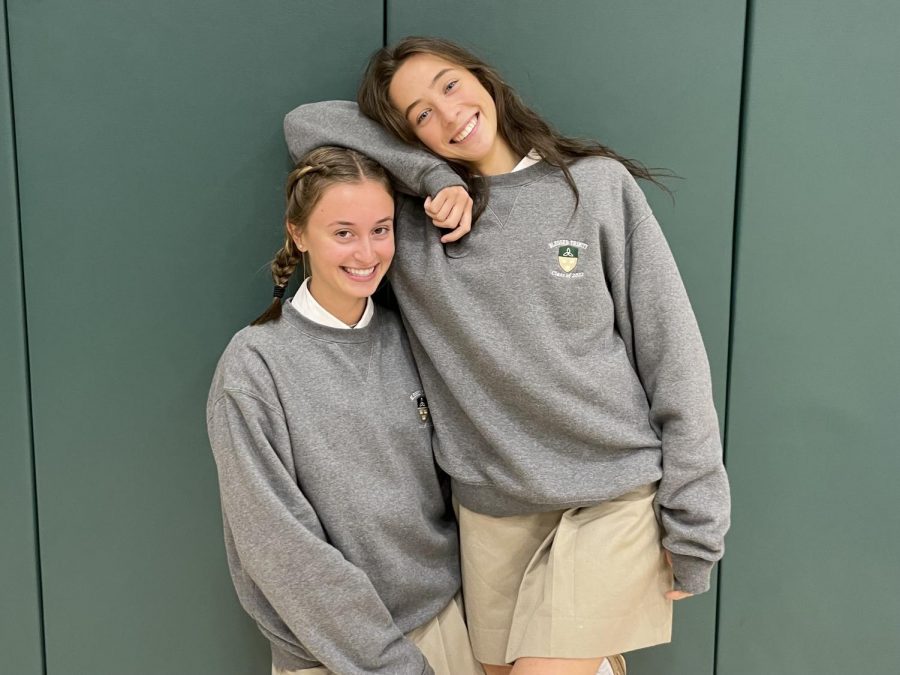 Blessed Trinity alumni have taken many things from their high school career including education, work ethic, and several life lessons; however, it could be argued that nothing sticks as close to people as the friendships they made during high school. In our own BT community, each pillar has formed unique companionships. One of these friendships formed through the fine arts community is the best friend duo of Gaby Strong and Ella Sousa, two seniors that will leave a lasting effect in the arts at BT.

Strong and Sousa are a part of the Trinitones, choir, and musical theatre. Their relationship kindled when they first met freshman year. As their relationship grew, they became very close and attended many events together. Sousa revealed, “The first semester of freshman year, we hang out before football games, and [our] friendship prospered.”

Friendships are an essential part of life and help us grow as individuals. Sousa proclaimed that being best friends with Strong has impacted her time at BT in a variety of ways. This includes sparking Sousa’s interest in the fine arts and has made Sousa’s “time at BT more enjoyable.” The music department at BT has given these students a gateway to friendship and it really shows that bonding through common interests gives the opportunity to gain a best friend.

The fine arts department is truly an amazing way to bond and form new relationships because you are constantly interacting with your companions, whether it be from running lines, singing a duet, or even “hammering harmonies” with Mr. Godbee. The fine arts department also helps you find who you are as a person. Strong stated that she has “learned to be confident in [herself] and not care what others think.”

Strong’s personality helped her get to know Sousa, and she stated that “after convincing Ella to take musical theater with me sophomore year, our friendship grew to a whole new level. We became closer than ever, and I am so happy it did because we are such great friends now. Everyone needs an Ella to look out for you and make you laugh.”

Mr. Gus Godbee, a staff member heavily involved in the fine arts, has watched the relationship between Strong and Sousa grow over the years. Godbee has also witnessed both of the girls develop and affirmed, “they have both grown because they started out very quiet and almost shy and now have grown into stardom and are more comfortable in the spotlight as seniors.”

Not only are these best friends inseparable, but they highlight one another in the fine arts department. Strong’s lyrical voice fits perfectly with Sousa’s musical abilities on the piano; Godbee says, “They both help each other with their different gifts.” It is astounding when two people that happen to complement each other in their musical talents also impact each other through other aspects of their lives as well.

Sousa and Strong are only one example of many that involvement in activities at BT is a great way to get involved and meet new people. You never know what friendships could be formed after putting yourself out of your comfort zone. Sousa and Strong found not only a passion for fine arts but a best friend for life.